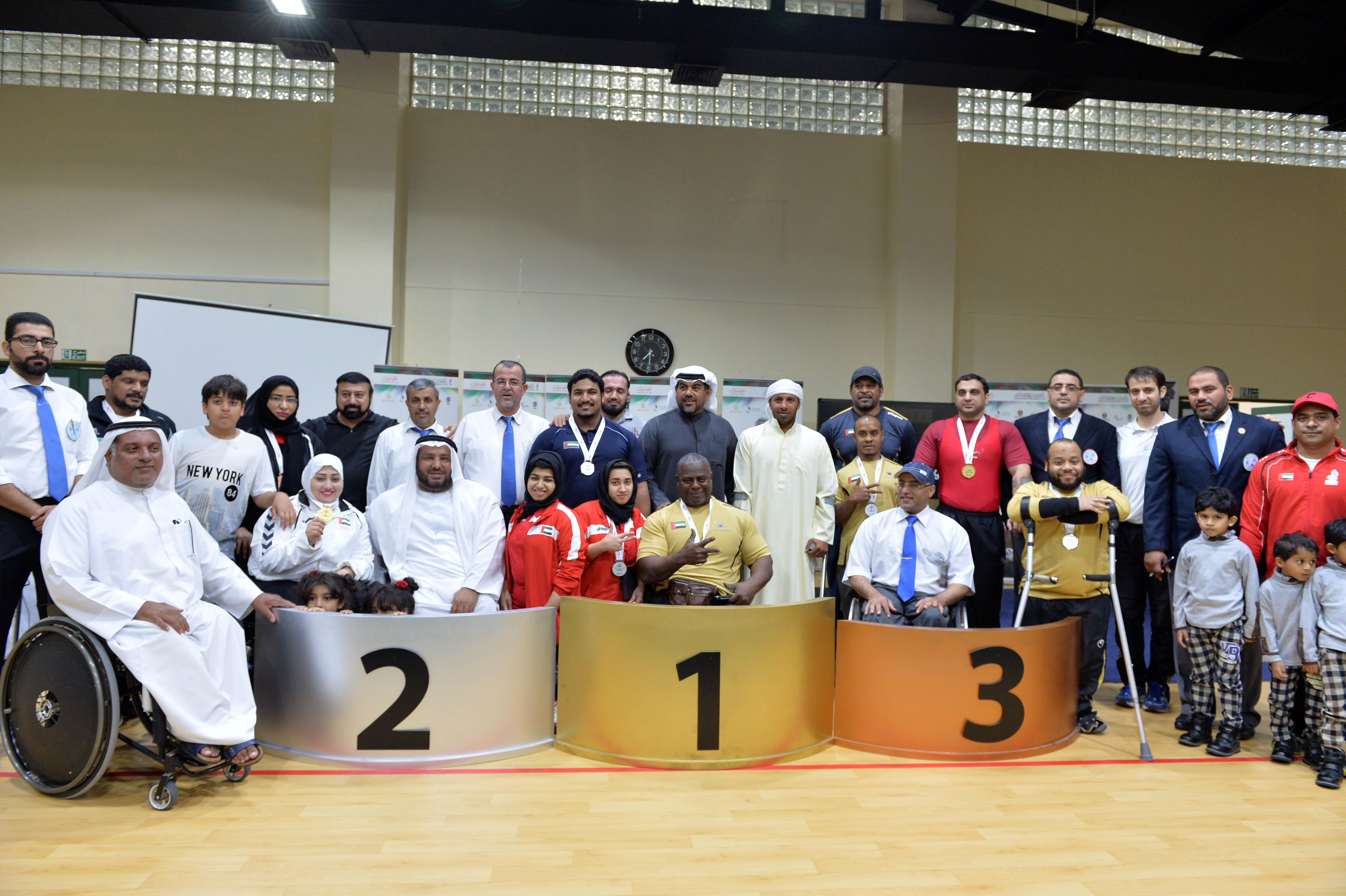 The competition is being held at the Dubai Club for the Disabled and began with a resounding show of determination and an excellent performance by competitors, and was witnessed by a large number of spectators and family members.

H.E. Thani Juma Berregad: "We are delighted and proud to launch the sixth edition of the championships, which will feature more games this year, amounting to a total of seven championships.

The Fazza National Championships for People with Disability is launched under the guidance of His Highness Sheikh Hamdan bin Mohammed bin Rashid bin Saeed Al Maktoum, Crown Prince of Dubai, and aim to discover and nurture local talent, and hone their skills towards representing the UAE as our national champions at a variety of international competitive sporting meets.

"We are constantly working on the expansion and development of the facilities and services provided by the Dubai Club for the Disabled. “

We have constructed a new hall to host the International  Stronglifts  Championship, and construction works have begun on a new international stadium dedicated to football and athletics, which is scheduled to be completed in October 2015," he added. For his part, Tito Qasim,  Stronglifts  Coach at the Dubai Club for the Disabled, said: "We started preparation about two months ago for this tournament, which is considered to be the training ground for those participating in the Fazza International Athletics IPC Grand Prix, which is growing into one of the world's key championships for people with disabilities.

This year's championship has seen a huge leap in standards of performance, number of participants and the quality of organization. Players are showing a great deal of discipline, persistence and determination and are embracing a spirit of challenge in overcoming all the obstacles in their path to success.

" Iron Will An example of the iron will on display is champion Mohammed Khamis, who embodies the true meaning of patience, strength and determination. After his shoulder was broken during the preparation for the Olympic Games in London - 2012, he underwent physiotherapy for more than year, after which he participated in the World Championship, where he achieved the fifth place, and was able then to return strongly to his previous fitness levels and achieve the first rank in the "Incheon Asian Games 2014", setting a new record in his name.

For his part, Khamis said that the tournament's importance lies in its value as a preparatory stage for the Fazza International Athletics IPC Grand Prix.

It also provides an opportunity for local athletes with disability to hone their skills, build experience, and gain motivational momentum for competing at an international level against other potential competition.

Khamis pointed out: "I feel confident that I'm in good physical condition and in an excellent state of mind, and I get substantial support from all those around me, including my family, friends and officials.”

He further said: "The Dubai Club for the Disabled means everything to me, and I am truly proud to be a member of it.

Everyone has backed and helped me to overcome my earlier shoulder injury, and has assisted me in accomplishing even greater achievements.

I believe the key to achieving success lies in possessing a strong will and being ready to work hard. The love of my homeland inspires me to exert more effort in order to raise the flag of my dear country high at the various international championships.

" Female Champs The Fazza National Championship for Stronglifts has also attracted a large number of female participants, with the level of competition matching that of the men’s championship in every respect.

Champion Haifa Al Naqbi, of the Khorfakkan Club for the Handicapped, who won the first place in the female category, said: "This is my fourth participation at the Fazza Championship for Stronglifts.

I have taken part in a number of external tournaments and managed to achieve third place in the Asiad Games in Korea.

" She commended the evolution of the Fazza National Championships over the past few years, in terms of the levels of performance, facilities, the number of participants and the organization of the tournament in general.

Sixteen players from different clubs are partaking in the championship, divided into a total of three groups according to their weight.

The results are calculated by points.

In the second category for men weighing 80 to 97 kg, Mohammed Khamis of the Dubai Club for the Disabled came in first place, followed by Abdullah Al Naqbi of the Khorfakkan Club for the Handicapped in second place.

In the third and last category for females who weigh 50 to 86+ kg, Haifa Al Naqbi of the Khorfakkan Club for the Handicapped secured the first place, followed by Mouzah Al Zouaydi of the same club in second place, and Insaf Al Nuaimi of Ajman Club for the Disabled in third place, while Mariam Al Zouaydi of the Khorfakkan Club for the Handicapped took the fourth place. Hospitality and Authentic Heritage On the sidelines of the championships, a social traditional corner is being held this year.

Sana Atallah, Head of the Social Committee in the Fazza National Championships for People with Disability, said: "The social corner, which reflects the UAE heritage and offers a number of delicious local dishes, has attracted a large number of visitors.

" She stressed that the Committee is communicating closely with the participating members' families, which gives them a great source of joy and achievement related to the successful performance of their relatives taking part in the tournament. - ENDs - About Hamdan Bin Mohammed Heritage Center: Hamdan Bin Mohammed Heritage Center is the reliable source and reference for the conservation of national heritage in the United Arab Emirates.

Its vision focuses on the promotion of the Emirati national heritage and communicating it to the young generation at regional and global levels.

In addition, the Center organizes events and competitions as well as conducts heritage studies and specialized research for the preservation and documentation of the UAE's national heritage.

It also provides traditional sources and references for researchers and interested parties, including all members of the community.

The Center serves as a platform for all initiatives, tournaments and activities on the country's heritage conceptualized by His Highness Sheikh Hamdan bin Mohammed bin Rashid bin Saeed Al Maktoum, Crown Prince of Dubai.

It seeks to consolidate the cultural Emirati heritage and be valued by the new generation.

The Center also promotes awareness about the UAE's values, customs and traditions inherent society, as well as activates young Emirati participation in the maintenance of their national identity.

Established in 1993, Dubai Club for People of Determination named “Best Club” in 2013 within Dubai Sports Excellence Awards sponsored by Dubai Sports Council. Dubai Club for People of Determination aims to rehabilitate the people of determination both physically and mentally to play their developmental role in the community in sports, cultural and social fields. The Club spared no efforts to devote all available capabilities to members depending on their disabilities


Dubai Club for People of Determination © 2021, All rights reserved